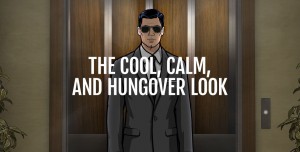 I recently was sent an email by a clothing and lifestyle company and for the first time in my life I saw advertising in a new way: I clicked on the link because I thought I would see clothes that would be suitable for a spy, and have features like secret pockets and maybe glasses where you can see the people behind you… but instead it was an entire wardrobe inspired by the adult cartoon TV series Archer. It was not shirts with the character on it…. like advertising, but it was clothes that he would wear if he existed in real life. It’s sort of made of people who think they show is cool and wish they could be more like Archer.

I feel this relates to the reading because it looks like a form of “remediation in which we blend and incorporate styles from conversations and writing with stylistic and formal elements of film, television, music videos, and photography, and other genres and practices (54).” The example adds another layer which is advertising, but I feel like the language in the ad is meant to be funny and is more like speaking one on one than a formal paper. The move towards informality is something we see on a lot of popular youth sites such as Buzzfeed.
The offer of…. being able to dress and look like Archer, even if you don’t buy the clothing, still unties the fans and gives them something to laugh at and enjoy as it is a “playful convention” and “in-joke” that “create insider symbols that can help a group to cohere” (51). The article states that these “phenomena are only enhanced by the additional cues found in shared videos, photography, sound…” etc (51). I personally have never seen anything like this and it is a pretty great way to market to people who may prefer to sit and watch TV than go out and shop and sift through things they don’t want. For a lot of people Archer is a funny sort of ideal man and it’s cool that you can sort of play dress up yet still buy modern things that would look good on anyone.
It’s interesting to see how these ties and cues continue to further develop.
I’d be fun to see a wardrobe inspired some funny actress or cartoon character that I like, it definitely gives the purchase more emotional ties because it reminds you of something you fondly admire and like.