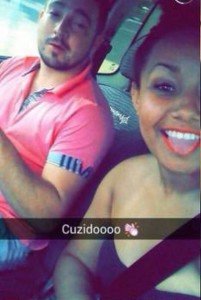 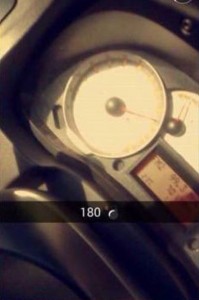 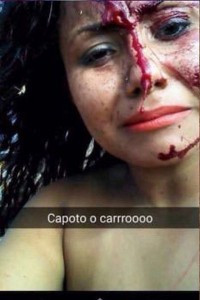 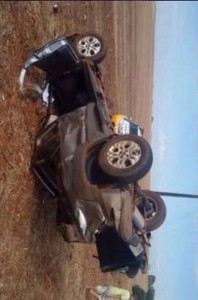 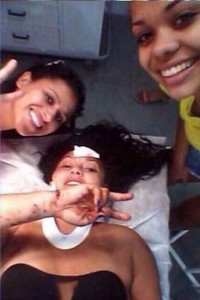 Often when I engage in social media practices, like posting status updates, selfies, or amusing anecdotes, I ask myself the very important question: “Why are you sharing this?” and if my honest answer is a little too vain or unfair to someone else -I decide not to post. This Snap Chat story above probably would have benefited from that inner monologue but I guess they probably didn’t have time to think once the car flipped. But the last time I had this conversation with myself I did decide to opt out of posting a photoset on Tumblr of Beyoncé and Jay-Z apparently fighting at a restaurant. I think taking photos of celebrities at restaurants without their knowledge is so inappropriate. Have you no shame? Just eat your food, and maybe if you absolutely have to you can tweet “OMG JAYONCE all up in Chipotle!!!”.

But it is like the mantra of social media: “if you don’t take a picture, it never happened”.

As an avid Beyoncé “stan” I was going to repost the photos with the caption “Believe half of what you see and none of what you hear”, as a way of commenting on how extremely out of context celebrity photos are taken. But by posting this, I had to admit I was just as guilty as the original iPhone paparazzo.  Why did I need to make this public indictment to expose the exposer? Why did I have to perpetuate this event that was ultimately none of my business?

Danah Boyd’s article on “Super Publics” brings up the idea of how social media has made us all the reporters and in response to not wanting to be reported by others- we report ourselves first:

“Media is obsessed with revealing the backstage of people in the public eye – celebrities, politicians, etc. More recently, they’ve created a public eye to put people into – Survivor, Real World, etc. Open digital expression systems coupled with global networks took it one step farther by saying that anyone could operate as media and expose anyone else. What’s juicy is what people want to hide and thus, the media (all media) goes after this like hawks.

Should it surprise anyone that teenagers have responded by exposing everything with pride? What better way to react to a super public where everyone is working as paparazzi? There’s nothing juicy about exposing what’s already exposed. Do it yourself and you have nothing to worry about.”

When we are participating in social media we are all just being little reporters, reporting on each other and reporting on ourselves. It makes total perfect sense but where it gets tricky is being honest about why things need to be reported and what we are perpetuating by posting certain aspects of our lives and the lives of others. So like the writer of article about the obnoxiously inappropriate people at the very solemn Domino Sugar Factory exhibit suggest: we gotta have some chill. Not everything needs to be up for public consumption.

In danah boyd’s blog post on “Super Publics,” boyd discusses the altered state of publics – what publics look like when they are infused with the features of digital architectures” and “about what it means to speak for all time and space, to audiences you cannot conceptualize.” Many selfie-takers are hyperaware of this extreme form of the public, and increasingly not only take selfies to remind themselves of a specific moment in time, but also to communicate with this super public about their existence. Perhaps this is the reason that according to selfiecity, more females than males take more photos of themselves—to illustrate to the world and themselves their existence, which has been historically ignored in a number of patriarchal societies. At the same time, this could also be the reason for the larger about of selfies posted by women—as these women could be performing for the presumably male gaze. Neither of these claims can be proven unless we ask the selfie-takers themselves, but it is clear than not only women are the ones who feel the need to perform for the super public.

Danny Bowman, a nineteen year old, would spend up to 10 hours a day taking up to 200 snaps of himself on his iPhone. According to the writer Alicia Eler:

In a story of isolation and fear in the digital age, this young boy became completely addicted to snapping and posting selfies. His life was ruled by clicks and likes; in a sense, the internet was his mirror, until, after overdosing on pills and being saved by his mother, he realized that he was more than just his selfie. “Gradually I realised everyone wasn’t looking at me. I didn’t need to check my appearance the whole time,” he told the Daily Mirror.

While this is an extreme case of selfie-taking, it is clear that Bowman was constantly aware of the super public as a source of validation, so much so it consumed his life. However, what he did not realize was that selfies only as an illusion—not as proof of existence, and that the user should be in control of the selfie—not the other way around.

With new and evolving technology, photography is more accessible now than ever before. With an increase in digital and social media usage over the past decade, there has been a parallel increase in online visual content. The amassing of images on the web has been a proponent of many legal battles concerning the copyright of certain images.

Case Study: Rachel Scroggins is an established fashion and portrait photographer based in New York City. Over the past few decades, she has shot at a myriad of runway shows and has a client list of popular fashion icons and texts such as Oscar de la Renta and Elle Magazine. She actively posts visuals for Oscar de la Renta’s social media accounts, like many emerging photographers. However, the capstone moment in her career occurred behind-the-scenes at a runway show. Scroggins snapped a photo of model Karlie Kloss mid-selfie and posted it to her blog. Just days later, Kloss naively reposted the image, sans photo credit, to her Instagram account – which has over 7k followers and up to 15k users who actively ‘like’ her posts. That is thousands of users who saw and ‘liked’ the image, but never got to see the credit of the rightful photographer behind the image. Acknowledging Scroggins in the post could’ve lead to many opportunities for magazines and publishers to pay Scroggins for her work; however, that image is now distributed – uncredited – virtually everywhere online and will be impossible to track and get compensated for.

Apologies don’t make up for thousands of dollars of hard-earned money, and although Kloss wasn’t deceptive in her actions, she instigated a never-ending copyright battle that Scroggins will never be able to escape. As an aspiring photographer myself, I understand the complications with not immediately copyrighting my images when they are posted online. I run my own photography business and have experienced many instances where my customers and peers post my images as their new profile image without crediting me. Every picture my clients have used has amassed the largest number of likes – comparative to their other posts – and it is extremely disappointing to know that I lost potential views and customers for my business because I wasn’t properly credited. Young photographers need to reevaluate business strategies earlier on to establish a sense of professionalism and get the credit they deserve. 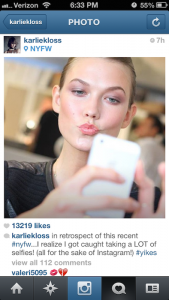 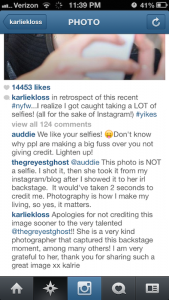 The moral of the story is to be careful about what you post. Copyright your precious material because who knew that a selfie could be worth so much money?

In “super publics,” danah boyd talks about how digital technologies are constructing and maintaining new ideas about what means to be “public.” Whereas, traditionally, the concept of public is “bounded by space, time and audience,” the introduction of new digital architectures as encouraged new understandings of the public space. While this certainly has positive implications (connecting communities that would have historically remained separate, for example), this is also introduced new challenges in competently navigating the public sphere. Information posted on the Internet has the ability to be transmitted to audiences that the user could not have predicted. Indeed, certain people can participate in the public theater of the digital world without consenting to or even being aware of their participation.

This brings me to Kanye. Yesterday, he attended the Super Bowl XLIX, where he was spotted by a couple of Seahawks fans decided it would be a great time to snap a selfie: 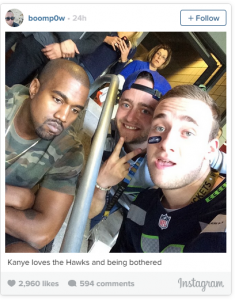 West very obviously does not want to be part of the photo–he’s scowling, hunching his shoulders, refusing to make eye contact with camera, and generally making it clear that taking a selfie was not high on his list of priorities. However, despite these visual cues, the boys decided to take the photo anyway. To a certain extent, it seems like West lacked any control over whether or not his image was going to be used; regardless of his feelings on the matter, he was going to be in the photo.

This seems like an extension of the enthusiastic self-representation boyd discusses towards the end of her essay. Teenagers (or, I would argue, all competent Internet users, irrespective of age) are eager to expose the details of their own lives on the digital stage, filling their Instagram feeds with pictures of their breakfasts and tweeting candid discussions of their everyday lives.

However, these savvy Internet users are also inclined to impose this pattern of open digital expression onto others. The idea that one could feel entitled to co-opt the image of another seems invasive to me. Though, as a celebrity, Kanye West is a special case (since his position as a public figure arguably lends itself to the idea that he is always part of the “public,” and therefore always selfie-able), I’ve definitely noticed friends and acquaintances snapping of photos or shooting grainy cell phone videos of people who did not receive the opportunity to opt out.