For this week’s reading I chose to read Timothy Berg’s (et al) “The Infinite Museum: An innovative Digital Platform to Transform the Museum Visit”. The Infinite Museum is a web application that prompts users with unusual questions in an attempt to push viewers to rethink their museum experience. On the site there are about 1,500 short prompts that are used to help engage viewers in new and innovative ways for their usual museum visit. The prompts range in mood from reflective to silly and to strange — each asking the user to try and reimagine and rethink the normal way they would interact with an art piece. To encourage a social effect, users are encouraged to respond to prompts that have already been posted, by allowing a stream of posts to follow the art piece shown above – this part kind of reminded me of reddit.

I thought this website and platform was really interesting because it touches on what we have discussed a lot in class which is how viewer’s interact with art pieces. However I do not know how effective or useful it is in creating a dialogue for museums and artwork. I only say this because I think that the prompts are somewhat distracting and too random at times, and I feel that this almost detracts from the goal of creating a conversation about the piece and more so attracts attention to the question alone by itself.

However, I thought the concept was really great and that this platform could be effective if some of the prompts and questions were dulled down a bit – I am not sure if having so many prompts and a catalogue of items would be overwhelming for the user.

This week’s reading discussed two different museums’ implementations of new technology as a way to enhance their artwork and whether it has become a positive or negative trend. The idea of seeing artwork in person versus seeing it online is discussed, and I thought this was an important point to bring up especially given at this time where a lot of things are becoming digitized. While making an online log of different collections allows easier access to the art, new interactions with the pieces, and new experiences, does it detract from the piece itself and take part of the artist’s meaning away from it?

Most art pieces I feel are intended to be seen in person instead of online. With the digitization of these pieces, I feel that the idea of resonance and wonder can be lost. I thought a good example of this was Yayoi Kasuma’s “Infinity Room”. The room itself is a platform of wonder – walking into a room that warps one’s sense of reality, making the viewer feel as if they are in a room with thousands of lights. However with the digitization of this art piece, as well as the overposting of it on social media such as instagram – does it detract people from going to see the piece itself or enhance it? 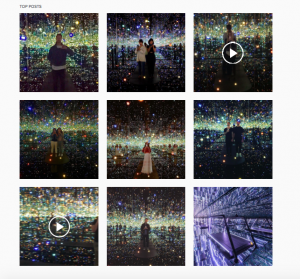 I feel like this is an important question to ask with the age of technology amongst us, because it could play a role in the future of whether people are allowed to take pictures of art pieces such as these or not. I feel that with the overposting of this exhibit, it could ward people away from seeing it because they feel as if they already know what they are going to see. However, also it could attract people towards the art piece because they want to know what all the hype is about. I feel like the use of technology and art work has such a fine line of whether it helps or takes away from the art piece. 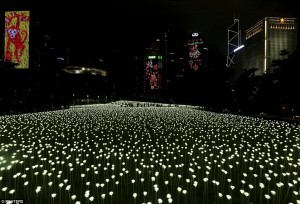