Anyone else have a weakness for those “What’s in your bag?” features? My stuff is not nearly as nice as the stuff those people carry, but deep in my heart, I seem to cling to the belief that my life really would be better if I could just optimize a few things.

Anyway, I posted on Facebook about a new receipt-filing thing I’d bought, and the response was so enthusiastic (what is wrong with my friends?) that I thought I’d do a quick post about what I’ve been carrying lately. I’ve been traveling for work a ton this year (way too much, obviously) and I’ve been devoting more thought than I’d like to admit to making my conference travel bag efficient.

So! Here’s the story:

I realize this bag isn’t to everyone’s taste, but I like it. I think it’s cute and it has a ton of pockets, including one for an iPad and one for a laptop. It zips closed at the top, which is handy for putting the bag through security. I used to carry messenger bags, but I guess I’m feeling too matronly for that these days.

It is kind of big, and it looks a lot more like a diaper bag in person than it did on Amazon, but I still like it.

It’s about time for a new laptop, but this one has served me pretty well. The battery did give up the ghost recently, but it’s been replaced. I’m a little torn about what to get next time around; the Air is supremely light, which I love, but it doesn’t have nearly enough storage for me. I don’t carry a laptop sleeve since my purse has a padded pocket for it.

One thing about me is that I refuse to present from someone else’s computer. I just won’t do it. I’ve been burned too many times by missing fonts or broken animations. I take my PowerPoint (actually Keynote) seriously!

OK, maybe this is excessive, since I also have the laptop, but the battery lasts a lot longer and it’s great for watching movies on the airplane. Plus, I use it to read my presentation (in GoodReader; I’ve experimented with teleprompter apps but didn’t really like them). This is far preferable to trying to find a printer at the conference hotel, and it allows me to make changes right up until my presentations.

The case is a roocase origami case, but I don’t recommend it. It’s supposed to prop your iPad in multiple configurations, but instead it just flops flat.

I love this thing. I carry extra medication, ibuprofen, and migraine pills in it. It’s saved me a few times when I’ve been separated from my luggage for whatever reason.

This thing (which has additional power ports on the reverse and sides) is great for airports with sparse power outlets. You can just ask someone if they mind sharing and plug both of your devices in. I also like the built-in USB outlets, since I don’t like carrying separate USB plugger-inner things, and the fact that it folds up so compactly. 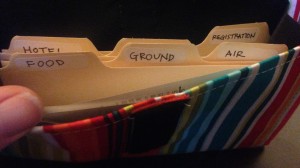 I have gotten in serious trouble with our department administrators because of my habit of filing for reimbursements super-late. (UCLA and many other schools require paper receipts.) I’m really hoping this thing cures me of my laggardly ways. It folds up flat, unlike the coupon organizers you get at Target. So far it’s worked great!

They have other designs, too, in case you don’t insist on buying everything in kindergarten colors. 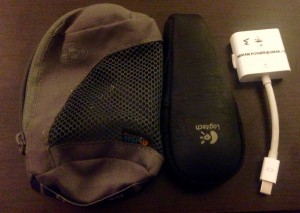 This slide advancer is awesome — it’s been a huge help for presentations and for teaching in my long, narrow classroom. The adapter is pretty self-explanatory, except please note and admire the email address attached to it! This has saved me the cost of replacing these things more than once.

The little pouch used to hold a travel towel or something and it’s the perfect size. I’ve tried a bunch of different things to hold peripherals, including the Grid-It (everything fell out) and the Amazon Basics Universal Electronics Case (way too big, even though some people love it). I’ve finally settled on carrying only what I need and dividing peripherals into two different cases, according to function (presentation and charging/listening). 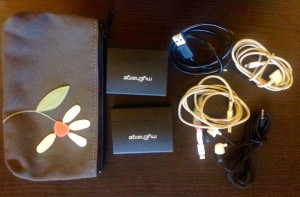 Carrying two backup batteries seems excessive, but I got an extra one when I thought I’d lost the first. And anyway when you’re traveling, you don’t want to mess around with running out of power. I think this particular kind has been discontinued, but I kind of like it. It has a flashlight and a power indicator.

I should probably get some noise-canceling headphones, but I’m a little afraid to invest any money in them. My dog has a bad habit of eating my earbuds, so I stick with the cheap ones. The little bag is from Queen Bee Creations and brings me great happiness.

It’s tempting to skip the extension cable, since it takes up so much space, but I find that conference rooms and hotels are the places I need it most. So into the purse it goes!

OK, fine, yes, it’s a Moleskine. And Sharpie extra-fines, if you must know.

This is a horrible thing where you pay $100 to go through additional security checks and then YOUR LIFE IMPROVES DRAMATICALLY because you can go through the Pre-Check line and skip the long customs lines. It takes forever to get an appointment, but OMG so worth it. Get Global Entry, not Pre-Check, since Global Entry gives you Pre-Check privileges and allows you to skip the customs line.

I usually also have a paperback, since I just can’t stand reading a book on an e-device. I’ve tried; I just can’t do it.

And that is it! I scrupulously avoid accepting or keeping any extra paper, since I’ve realized that when I travel, staying super-organized is key to ensuring that I don’t leave things behind or get confused. Everything has a place in my purse, so I notice immediately when it’s missing.

SeatGuru is not an app, but it’s great if you, like me, are super-picky about your seat. I also try to check in as soon as it opens, since you can get better seats that way.

Oh, and if you think you’ll want Internet access on your flight, purchase a pass from GoGo before you board the plane. It’s $10 cheaper that way. And if you have the User-Agent Switcher browser extension installed, you can save money by switching it to iOS and buying only a mobile pass.

So what are your super-secret conference travel tips?

4 Replies to “What’s in your conference travel bag?”