I think about PowerPoint a lot, and judging by the reams of blog posts, screeds, and instructional books on the topic, I’m not the only one.

The interesting thing about PowerPoint is that it’s not that new. Well, PowerPoint is, relatively speaking (the software package emerged in 1980), but the basic idea — the slide presentation as a way to convey specialized knowledge — has been around a really long time.

The slideshow itself is at least as old as the seventeenth century. The German polymath Athanasius Kircher (1601–1680) used an oil lamp to project engraved images against the wall. 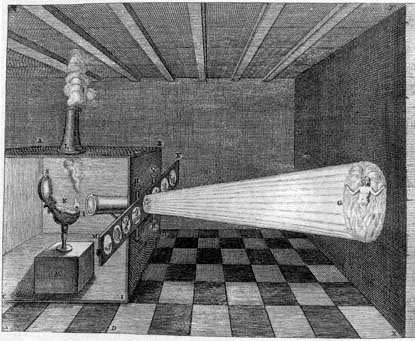 In the following centuries, conjurors and impressarios used magic lantern technology to mount elaborate fantasmagories, haunted houses of sorts in which the images of ghosts floated among audience members.

In medicine (the profession with whose visual culture I’m most familiar), the earliest mention I’ve found of the lantern slide is in the 1870s, when the neurologist Jean-Martin Charcot used the tool to illustrate his lectures. By 1906, a physician wrote, “Lantern slides are now considered as necessary educational material as maps and natural history specimens” (Holtz 1906).

During the entirety of the twentieth century, it was absolutely de rigueur for the physician to present slides of patient photographs, microscopic enlargements, and — yes — bullet points at conferences and as part of medical education. (On bullet points and tables, see Hewitt below.) Later, physicians would use filmstrips, transparencies, and, now, PowerPoint. 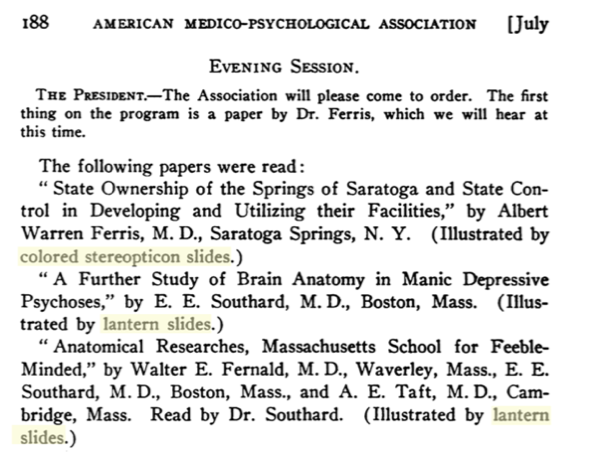 I don’t know much about slideshows in other disciplines, but at least by the 1890s, art history students were using the darkness of the slide presentation as cover to sneak out of class. (See Nelson and Fawcett below.)

What does PowerPoint mean? Or, I guess, how does it mean? Edward Tufte famously condemned PowerPoint for what he identified as its tendency to limit analytical thought and debate. In 2003, the Columbia Accident Investigation board cited Tufte’s work when it implicated PowerPoint in the space shuttle disaster. Tufte’s problem is not so much with the medium itself, though, as with its practitioners’ fondness for bullet points and built-in templates.

Beyond bullet points, though, PowerPoint has some other interesting characteristics. It requires a semi-darkened room and, by enlarging the slide beyond the scale of the speaker, asserts the primacy of the image over the spoken word. The art historian Robert S. Nelson suggests that the dominance of the slide lecture may have something to do with the century’s faith in mechanical objectivity — versus, say, narrative or interpretation — as the most truthful depiction of knowledge.

At the same time as it elevates the image, says Nelson, it divorces it from context: “from neighboring images, attendant sights, sounds, or smells, and the community, traditions, and functions of the original” (433). It posits the existence of “facts”: units of transferrable knowledge that are always true, regardless of the way in which they’re used.

This seems accurate to me, especially when I think of my own experience dragging and dropping slides to rearrange a talk, or pulling a slide in from one presentation and dropping it into another.

Using PowerPoint never seemed so strange to me as when I used it in the course of teaching about French neorealism, with the genre’s insistence on long takes and its faithfulness to the contingencies of reality. Even amidst the hustle of class preparation, it seemed odd to slice up a shot from Jules et Jim, drop it into a slide deck, and claim to be teaching my students about the beauty of long, slow deliberation.

Perhaps, though, PowerPoint is appropriate, if not to Jules et Jim, than to the imperative to convey its essence to my students in fifty minutes. Which is to say: perhaps making Jules et Jim portable, learnable, and transferrable requires its PowerPoint-ification.

More on PowerPoint and Slideshows

(A Few) Manuals, Articles, and Other Primary Sources

A Mere Phantom. The Magic Lantern, How to Buy and How to Use It. Also, How to Raise a Ghost. London: Houlston and Wright, 1866.
Chadwick, William Isaac. The Magic Lantern Manual. London: Frederick Warne and Co., 1878.
Elmendorf, Dwight Lathrop. Lantern Slides, How to Make and Color Them. E. & H.T. Anthony, 1897.
Gage, Henry Phelps. Optic Projection, Principles, Installation, and Use of the Magic Lantern, Projection Microscope, Reflecting Lantern, Moving Picture Machine. Ithaca, N.Y.: Comstock, 1914.
Harding, F. R. “Aids to Visual Education.” New England Journal of Medicine 231 (August 10, 1944): 224-227
Hepworth, Thomas Cradock. The Book of the Lantern: Being a Practical Guide to the Working of the Optical (or Magic) Lantern. with Full and Precise Directions for Making and Coloring Lantern Pictures. with Seventy-Five Illustrations. E.L. Wilson, 1889.
Hewitt, Richard M. “Tabular and Textual Lantern Slides.” Journal of the Biological Photographic Association 5, no. 4 (December 1936): 167-185.
Holtz, Fred L. “Lantern Slides.” School Science and Mathematics 6, no. 4 (1906): 262-267.
Kircher, Athanasius. Ars Magna Lucis Et Umbræ in Decem Libros Digesta, Etc. Romæ, 1646.
Marcy, Lorenzo J. The Sciopticon Manual, Explaining Lantern Projections in General, and the Sciopticon Apparatus in Particular: Including Magic Lantern Attachments, Experiments, Novelties, Colored and Photo-Transparencies, Mechanical Movements, Etc. Philadelphia: James A. Moore, 1877.
McClusky, F. Dean. Visual Instruction: Its Value and its Needs: A Report for Will H. Hays, President, Motion Picture Producers and Distributors of America, Inc. New York: Mancall Publishing Corp., 1932.
Pease, Herbert D. “Scope and Value of Lectures.” Journal of the American Medical Association LIII, no. 21 (1909): 1762.
Wilson, Edward Livingston. Lantern Journeys: A Series of Descriptions of Journeys at Home and Abroad, Including the Centennial Exhibition, for Use with Views in the Magic Lantern or the Stereoscope. Philadelphia: E.L. Wilson, 1878.
Zimmer, Stella. “Filing of Photographic Prints.” Journal of the Biological Photographic Association I, no. 1 (September 1932): 29-34.

2 Replies to “PowerPoint as a mode of knowledge production”