I expect for museums to use digital tools to create narrative that gives unique perspective and context that cannot be accomplished from just being in the presence of the physical object. Museum digital tools should be exciting and fun but also functional and assist with research and creating a lasting sense of resonance with the collection.

I really dislike online classes. I always find myself trying to treat them like a game that I want to win instead of engaging with the material. I think the only class online that would be effective would be a creative corse,like design and media arts such as 3D modeling. It would be cool to create online an engage in a dialogue cross culturally with other students. Maybe a language component could be involved.

I really like art 21 but I feel like sometimes they focus to much on process. I like the personal aspects of this piece.I find it funny and endearing and it makes me feel more connected to his work and him as an artist.

I chose to read an article from 1998 by James Berry entitled “The Virtual Docent”. I found this article interesting because it was written 18 years ago and it is proposing digital technologies to repair discrepancies in the museum world that we use today and that we have surpassed.

The article calls for some kind of virtual docent program in which docents are able to lead patrons from off site, transcending place and time.The article proposes examples where technology is used to extend the interpersonal aspects of museum docents. While I feel that many museums have not replaced docents with digital tools, I do not see that museums have incorporated them well into docent relations. Usually in museums there are either docent lead tours or self guided audio tours.I think the closest we see to the resolve that the article calls for is at the Brooklyn Museum, where they have text in docents answering questions. However, as we discussed in class, this is more of a community based outreach that does not transcend space as the “virtual docent” does.

However, I do think it is interesting that the article looks to virtual docents as a way to reach schools and interested patrons that may not be able to reach the museum. I see that this is very apparent through the digital designs and interface of museum websites. I think in a way, how museums curate their online databases is a a of virtually docenting. For example, the Getty has its collections available on line and commentary from the curators of exhibitions and walk throughs. The Hammer streams all of its art in conversations and museums like the Cooper Hewitt have virtual activities to make viewers make meaningful connections with the art. In this way, I feel that there is no real resolve in the personal aspects of docents but digital tools can still be used to make meaningful connections with the art.

This weeks readings really reminded me of mismatched ontologies and the Duarte and Bellarde-Lewis reading, “Imagining: Creating Spaces for Indigenous Ontologies”. The reading discusses Native American history and artifacts which have been historically miscategorized when confined to the standards set according to western ontology; they have a different belief system and when we impose a single system on these objects it is impossible to convey the complexities of the object or accurately record histories.

When reading “Cataloging Cultural Objects A Guide to Describing Cultural Works and Their Images” I was about dismayed by its inability to deal with multicultural objects. The standards set in place to make archival processes easier to understand and knowledge more transferable to data, strips the object of its autonomy and multidimensionality. As someone who works with museum systems, I see the importance of guidelines in managing collections,  however, I also see how it fail objects whose lifetimes existed far outside of purely aesthetic utility.

The extensive guidelines for categorization that have been set out in the past and are derived from “Anglo” standards fail to represent the nature of all objects. It it is impossible to set a universal method for archiving and discussing objects because in many cases the “controlled vocabulary” does not match the ontology of many people who are trying to use those categories. Wallack, Seddon, and Srinivasan’s “Reconciling Mismatched Ontologies in Development Information Systems” discusses how these instances of mismatched ontologies result in information loss and tangible consequences that impact communities in specific ways especially when the power dynamics involved in archiving have been weaponized against minorities with non-western ontologies in the past. While I recognize the importance of archival guidelines, I am critical of who has historically been in charge of managing databases and now has the power to set the confines through which they are defined.

I found it interesting how Ridge’s article linked the public’s call to open data and transparency within their government to museum’s movement towards open cultural data. this move has always excited me because I feel that in opening up museum data to public use, it forces the museum to further analyze their collection and find meaningful connections as well as gaps in representation. As stated in Ridge’s article I feel that museums may be frustrated with the public’s lack of interaction with these technologies because most people only go to museum websites to check the hours and see what is on view, and these newly pubic datasets tike a large amount of time and money to produce.

This race to make museum data public I encounter everyday in my work at the Hammer Museum. I work with rights and reproduction and digitizing the Hammer’s collection of works. Right now the Hammer has a few works online but we are working to digitize the entire collection. This process has been extremely arduous with getting copyrights form artists, galleries, and estates and then getting images created for these works. As a student I was always frustrated by the lack of information museum’s provided on their website, however, through this internship I have gotten a lot of insight into the roadblocks that occur when creating this info. In the Wall reading we see the importance of standards in creating and presenting understandable and meaningful data. I think that with contemporary and modern art it is becoming increasingly hard to set uniformed classifications especially with medium. Many artists blur the line between previously rigid lines of what defines mediums. I found that in making my DH101 project using the Tate’s collection of Turner paintings it was hard to classify works as drawings or paintings because of the multimedia work of the artist and it became hard to discern which pieces were sketches and which were finished works solely by looking at the data. It is important to see the image itself. In flattening this to produce data do we loose the multidimensionality of the work?

In Greenblatt’s article, he discusses the life f the object before it entered the museum, that these objects served a purpose and have a history that shifts when it is placed in the museum setting. He asks us to consider:

How have the objects come to be displayed? What is at stake in categorizing them as ‘museum-quality’? How were they originally used? What cultural and material conditions made possible their production? What were the feelings of those who originally held these objects, cherished them, collected them, possessed them? What is my relationship to these same objects now that they are displayed here, in this museum, on this day?

This weekend I visited the Art of the Pacific exhibition at LACMA I contemplated these questions. While the hierarchal nature of museums have historically subjugated non-western arts and artifacts, I feel that many museums have attempted to correct these wrongs by “elevating” these arts by in some ways decontextualizing their objects to display them for purely aesthetic value, as western art objects. This was apparent in the Art of the Pacific Exhibition. The presentation of the works is rather beautiful in a minimalist “white box” display with no text. 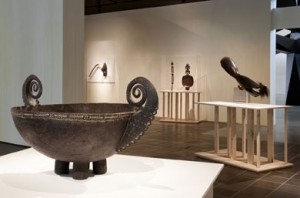 While the lack of text to give context for these pieces and their “former life’s” is problematic in itself, as many of them where not just meant for aesthetics and were stolen from their original owners through colonialism, I also found it troubling that they invited a visiting artist, Franz West, who is neither of Polynesian or Melanesian descent or an expert on the objects to present the show. While one from the culture cannot represent the beliefs of all pacific communities, I found it a bit strange that they chose a western artist to “elevate” these works to make them “museum-quality”.

When considering multifunctional cross-cultural objects that have been displaced and re-contextualized in a museum, I think that in may ways, the way to resolve the flattening of their presentation is not just through text as Greenblat’s article suggest, but unique approaches to display including digital technologies.