This week’s reading on the Exhibitionary Complex discussed the evolution of museums and its role as a public institution in a position of power to preserve heritage and educate people about it. The article reminded me of the recent appraisal LACMA received for the activity on its Snapchat account, where reporters discussed the comedic approach museum digital strategists used to engage users with their collections. Below are some of the funny snaps from their account: 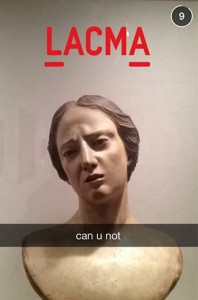 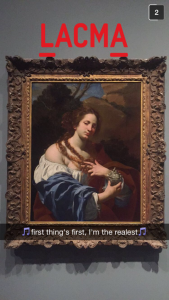 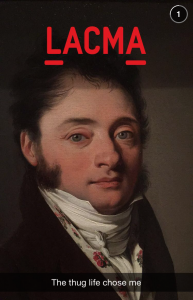 To me, LACMA’s approach to publicity is an extension of the concept of the Exhibitionary Complex. This complex is one that applies not only to museums, but to social media platforms and the desire to build a digital image, reputation and history. In the same way that museums were given a newfound power to “order objects and persons into a world” (pg 98), social media and marketing strategists have immense power to create an image for, and convey information about the organizations they represent. LACMA’s use of slang and humorous references to youth culture arguably made museums more attractive to Snapchat’s young user base, and connected them with the museum’s information economy in an interesting way.

In addition, LACMA’s use of Snapchat was a tactic to debunk the myth of fine arts appreciation as time-consuming, irrelevant and inaccessible- while I enjoy visiting museums, several of my friends think it is either boring, too abstract, or something they would simply not prioritize doing on a free afternoon. This reminded me of Bennett’s commentary on the role of exhibitions and events as fulfilling “short term ideological requirements” (93). Although museums have a fixed role and a permanent collection, they are able to make the institution relevant by putting on new exhibitions (for a limited time) that speak to current trends or recent historical events. This allows museums to be part of a larger conversation going on in the area/world. Connecting this to LACMA’s use of Snapchat, I think the move was part of the institution’s recognition of trends in digital communication, and the flexibility the museum had to capitalize on such trends in spite of the traditional purpose they have.

Finally, LACMA’s Snapchat move reminded me of Barthes’ remark on the “habitual divorce of seeing and being seen” (97). In the article, Barthes describes the Eiffel Tower as the perfect example to illustrate the technology of vision- the site itself can be a site for a sight. Looking at the Eiffel Tower gives us one view, but visiting the Eiffel Tower gives us a bird’s eye view of Paris that we otherwise might not have access to. In the same way, I think that LACMA’s Snapchat account embodies this dual vision. We view museums as a site for the exercise of cultural capital, but social media strategists are using these traditional pieces to exercise their knowledge of youth slang. Attempting to caption the art so casually and unconventionally puts the art in a different light compared to what we might experience in a museum, and allows us to establish a more personal relationship with art even via our phones.

This week, I had the pleasure of reading Tony Bennett’s “The Exhibitionary Complex,” and was really intrigued with his explanations and justifications behind the complexities of the formation of both exposition and spectacle. Drawing upon numerous examples from past institutions, such as a “cabinet of curiosities” and a “Great Exhibition,” Bennett brings up the notion and case of the Crystal Palace. A cousin to the panopticon, which was an architectural method that allowed maximum observation of inhabitants, the Crystal Palace “reversed the panoptical principle by fixing the eyes of the multitude upon an assemblage of glamorous commodities. The Panopticon was designed so that everyone could be seen; the Crystal Palace was designed so that everyone could see.” Interestingly, the Crystal Palace combines the functions of both spectacle or participatory observation, with the concept of surveillance. Bennett continues to explain how the Crystal Palace is a useful term in the exhibitionary complex; society itself is a spectacle, institutions’ involvement of providing spectacles, and above all, allows for permanent displays of knowledge, thus asserting power.

I found this idea of the Crystal Palace and its purpose to be reminiscent of many of today’s museums and their exhibits. Like how we had discussed in class, it seems as if many museums are employing the use of installations and interactivity to better exhibit art. But a question is raised; with the purpose of many pieces being audience participation, are the users then pieces of the art itself? It can be said that a museum is a Crystal Palace, where museum goers are not only encouraged to view works, the spectacles, but are also assumed to be “under surveillance” of the museum. Heavy words, I know, but it is essentially observable in how power is displayed by what is called for in an exhibition, as well as how museums essentially “curate” the public as viewers themselves.

“…The development of the exhibitionary complex also posed a new demand: that everyone should see, and not just the ostentation of imposing facades but their contents too.”

To further surmise, I especially feel that Bennett’s words are imperatively relatable to the expositions of the digital age– everyone should see, but with the addition of evolving forms of digital display and creation, everyone should be seen as participants of these expositions, as well.

Despite the perplexities that the theory behind the Exhibition Complex introduces, the intersection, or really the duality, of Bennett’s notion of seeing/being seen was extremely intriguing. Ignoring most of the implications brought forth by the article, such as the identity of the crowd, the Eurocentric tendency of the museum, and the social implications of the crowds and museum goers, I thinking mostly of the design of the museum, and the interaction of the crowd and artifacts. For me, this interaction cultivates in two ways: the crowd becoming part of the display, and the crowd as a separate spectacle. Those attending the museum are there to see the what is displayed in the museum. Simultaneously, however, those gathered around the artifact are also part of the viewing process. At museums I often find myself observing the crowd just as much as the art, noting the way that people move through the museum space, and how long they take to look at items, and in general which items have the largest crowds so as to avoid them. Just as Bennett pointed out in the article about the Great Exhibition of 1851, the spaces seem designed for you to observe the people just as much as the exhibits themselves. I definitely fall into that trap: it’s always a moment of great joy and interest to see who else is attending the museum with me.

In modern times, seeing versus being seen has a completely new implication thanks to the invention of the internet and social media, and the incorporation of technology in the museums themselves. Museums compete with artifacts once again becoming public (if we consider items inside a museum as  “private” which is a somewhat contested idea)  as posted pictures circulate widely. People can now “see” things in this way without being seen. Conversely, museum-goers can be seen publicly not just by attending the museum but by sharing selfies on various social media platforms. This spreads the network of being seen even farther, than just the physical space of the museum. It is a great boost of cultural capital, as now your museum visit is even more visible – everyone can know that you attended, rather than just the strangers in the museum.

I really enjoyed the reading about the app Art++ in “Next Practices in Digital and Technology,” by the Association of Art Museum Directors. I feel as though the decision of the designers and developers to use an app on one’s smart phones or tablets to better augment the museum experience is a progressive step into the future. By creating an app that acts as an interactive tour guide and identifier of art pieces and provides explanations of the different works, Art++ gives visitors the ability to engage with the pieces in a way beyond just walking past them in the museum space. This creation highlights what our class discussed about museums trying to make themselves into an experience that is more accessible to everyone in the public sphere. Although these apps definitely are a good start, as they allow those with smartphones to learn more about the spaces they are stepping into, it still only caters to those in society who can afford a smartphone in the first place. So although technology allows the museum to take the first steps in stepping down from its elitist roots, the museum still has a ways to go in ensuring that it is an experience that can be understood and appreciated by anyone.

To be honest, I’m not sure if technology can ever fully bridge this gap. Although technology can pave the way for a more universal experience at a museum, the museum itself can never remove itself from the fact that it is an institution that requires a certain level of status and cultural knowledge to be understood and appreciated. If anything technology might further complicate the idea of a museum, as it changes the definition as well as the creation of things that are considered “art” in the first place.

Here’s a link to the app’s website if you want to check it out:

In reading Weil, I was interested in the general role of the museum. What purpose does the museum serve? Namely, does the institution provide special services to the visitors or does it focus on the objects while allowing the public to view the process? If the first, the museum would be considered a business, selling a product of cultural capital to the middle class public. The implementation of technology in this case would therefore mean that they are just expanding there means to sell. They cannot give too much information via digital platforms as this would negate the need to visit the museum in person and pay admission. Still, minor platforms can be used as a means of advertising and attracting new customers. While some museums have free admission, all museums rely on donors which make up a large portion of funding. The more well-know a museum is, the likelihood for funding will increase.

In light of the business model, I am hesitant towards accepting museums as saintly institutions. There is just as much politics and controversy behind the intellectual shroud as any other corporation. On the other hand, if the museum focuses on the pieces instead of the public, they limit the ability of the outside world to learn. Culture and art would therefore be limited only to the few who spend their lives researching it. While the objects are far safer in this situation, they are not shared with masses and open for education. In extreme cases, one could eliminate the need for museums in general an replace everything with digital technology. However humanity itself is affected as the need for human creation is eliminated from the process. If people were to solely interact with a screen and digital platforms they would lose the direct contact they would naturally have by interacting with another individual’s work in person. Putting everything in digital form eliminates the drive to create in the first place. If artists know their work will never be put in an institution, they may not bother to make art at all, although some will switch to the digital form.

Our Questions about Museums and Technology 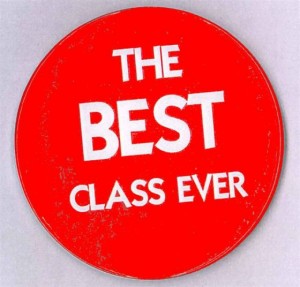 Welcome to Classes Multisite Sites. This is your first post. Edit or delete it, then start blogging!