This week’s readings were focused on the open cultural data museums present and how they are being used for visualization studies and analysis. In particular, Mia Ridge’s “Where Next for Open Cultural Data in Museums” highlighted how the community can interact with projects and art pieces better because they are given access to the open cultural data and linked data. Open cultural data refers to any data that cultural institutions make public and accessible, for example museum images and captions. Meanwhile, linked data is another way of sharing information however, if requires other sources that relate to the data being described as well – for example the “Cooper-Hewitt’s Collection Color History”.

I thought it was intriguing how the idea of open cultural data could not only be applied to museums but also to any type of information source whether it be science, epidemiology, sports, food, or wines. In the past for my job, we have had to learn a lot about different alcohols – especially beers and wines. As a waitress, we would have to be able to explain why certain wines were priced differently than others and what the significance was behind that. When learning about different wines – I found a open data website for them. 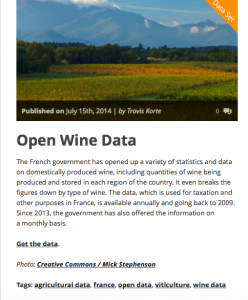 This “Open Wine Data” website has been compiled from public data released from the French government about the statistics of domestically produced wine. The data includes the quantities of wine being produced, the annual figures of wine, and where it is being stored in each country. This data helps explain for example why a 1984 Bordeaux is so sought after. During that year, the sales were really high – and the way the wine was made in particular makes it really special.

I thought open data in this situation was really interesting, because I never really expected it to be used to explain the reasoning why some wines are better than others.