In this week’s reading, “The Museum As a Way of Seeing,” by Svetlana Aplers, Alpers illustrates a variety of examples of her experiences at art museums and exhibitions: specifically that of Dutch art and the MOMA. She further argues that “the museum effect… is a way of seeing. And rather than trying to overcome it, one might as well try to work with it.” Thus, the installation of the objects do, indeed, attribute to the viewer’s overall experience. Alpert even goes as far to say that museums need to “pay as much attention to the possibilities of installation as to the information about what is being installed.”

This reading heavily reminded me to an academic article written by Erkki Huhtamo, a professor here at UCLA’s Design | Media Arts department, titled “Explorations in Exhibition Anthropology.” In Huhtamo’s piece, Huhtamo discusses how the display of the work and the signs that surround the work will attribute to the piece itself. For example, by having a sign that says “Do Not Touch This Piece,” it implies that there are other pieces that are to be touched and interacted with. Also, when the space of an installation was arranged that a doorway was right behind the piece, viewers were naturally inclined to walk behind the piece even though it was later discovered to be off-limits as soon as the security stopped them. Huhtamo discovered that the way a piece is presented has the potential to ultimately take away or add to the viewer’s experience of the piece. 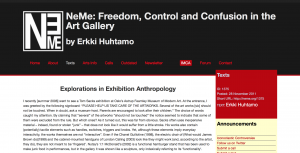 Although both writers have different aims in resolution, they both discuss a similar premise — that is, the design of the installation plays a role in the museum space. Alpers, on one hand, illustrates the importance of presenting the work in a way that educates the public — leading to resolutions such as MOMA’s audio tour guides, giving clarity and clear vision to the pieces in an exhibition. Huhtamo, on the other hand, depicts the significance of designing a space to present the works in the most practical way that viewers can get the optimal experience, without confusion whether or not to touch the piece or disfunction in regards to where to walk, and able to fully put their focus on the piece itself.

4 thoughts on “Week 2 — Installing art is an art form”