The basis of my network graph originates from  a short story by Goncalo M. Tavares titled, “The Headless Woman” that was translated from Portuguese. The plot centers around a mother whose head was decapitated by her husband. The mother wanders through a massive labyrinth, searching for her three children. The children, in turn, are also looking for their mother; they use the trail of blood that has spewed from their mother.  The children’s goal is to locate their mother’s head and return it to her; they search for three days and nights. On the fourth day, the three sons finally find their mother’s head. However, they are not able to find their way back to their mother since the older brothers made the youngest one clean up all of their mother’s blood. The three sons decide to split up to find a way back to their mother and would yell if anyone reaches her first. The oldest son is the one to find their mother first, but is unable to scream. The author leaves this ending ambiguous to the fates of all the characters.

When forming my network graphs, I decided to center my information on the the children’s return (yellow nodes) to their mother (blue node). The lines represent the initial distance each child had to reach their mother’s body; it would have been great if the individual lines could be altered to express the different physical distances the sons had away from their mother. This type of graph would best be maximized in stories with more characters and more relationships. Since this story is only comprised of four characters, it ended up being very simple. This is not to take away from the usefulness of the graph; it is an interesting way to visualize personal relationships and can be used in different arrays in the future. 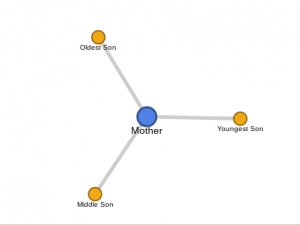 below is a link to my diagram: