If you’re going to do any programming, you’re going to want to be able to move around in your computer’s terminal, also called the command line or the shell. Read on to learn what this is and why it’s useful.

Find your computer’s Applications folder and look inside it to find your Utilities folder. Once in the Utilities folder, locate the Terminal program and double-click to open it. 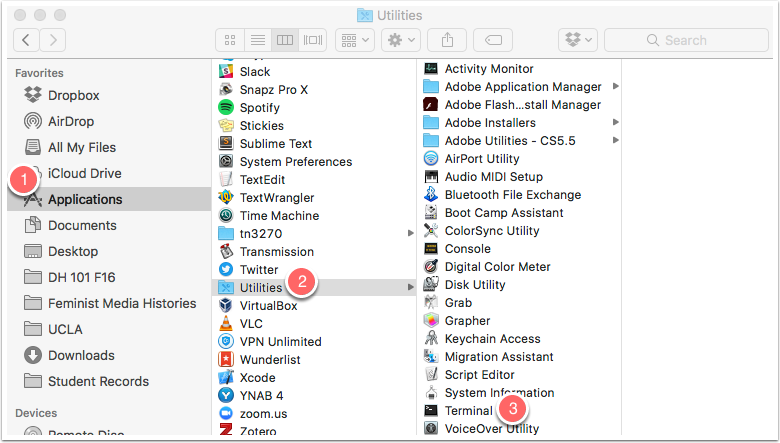 2. What is the Terminal?

The exciting empty box you see when you open up the Terminal (also called the command line or the shell) is your direct line into your computer’s operating system. You can use it to navigate around folders, manipulate files, mess with the guts of your system preferences, and basically just do all kinds of fun stuff inside your computer. The biggest difference between the command line and other programs on your computer is that you don’t point, click, and drag your mouse; you enter commands as text.

The last line of text you see in your terminal should be a username followed by a dollar sign ($). That’s called the command prompt. It means your computer is waiting for you to talk to it!

3. Talk to your computer

Your terminal speaks in a language called Unix or shell script. When you use Unix, you can do a lot of the things you’d normally do by clicking and dragging, but a lot more slowly and labor-intensively. Just kidding, sometimes it’s slower and more labor-intensive, but sometimes it’s faster; it just depends on what you’re doing.

The first thing we need to do is figure out where we are. When you open your terminal, you’re dropped somewhere in your computer’s file system (usually the user’s home directory, designated by your username). To figure out where you are type:
pwd

and press return. pwd stands for print working directory, i.e., “Tell me where I am.”

Your computer returned some text showing you your location. If you think about your files on your computer, they form a sort of upside-down tree: the root is your home folder, and the branches extend all the way through multiple folders into all the individual documents you have on your computer. 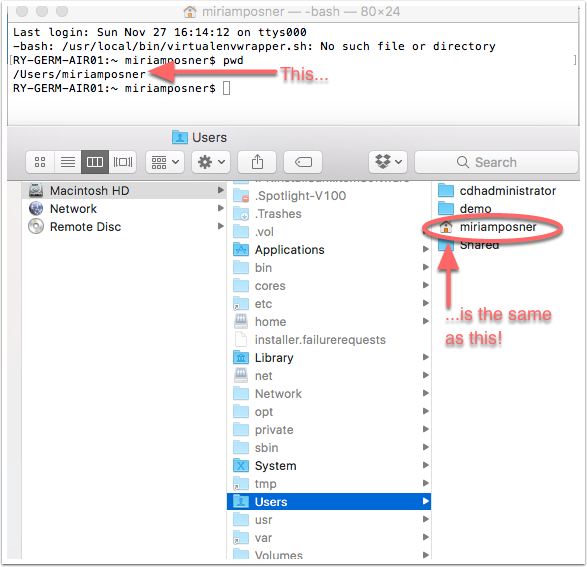 5. Figure out what’s inside the folder you’re in 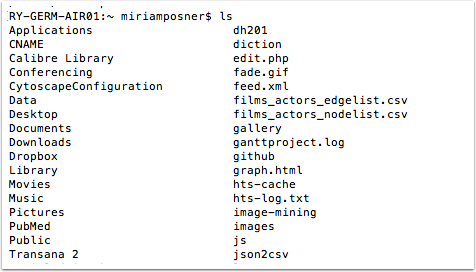 6. Move to your Desktop

Let’s move into the Desktop folder, since that makes things easy to find. Type

and press return. (Tip: If you type the first few letters of the folder, followed by the tab key, the command prompt can auto-complete the name of the folder.) cd means change directory.

By the way, if you ever need to move up the tree, you can do that by typing

and pressing return. cd .. means move up one level.

7. Make a text file with MAGIC!

Now that you’re at your Desktop, let’s make a text file. Type

and press return. touch means create an empty file. Look on your Desktop. You should have a file there called hello.txt!

Go ahead and double-click on that new file and type something in it. Then save the document.

8. Read your text file in your terminal

Back in your terminal type

(Tip: You can use autocomplete here again by typing the first few letters of the filename and pressing the tab key.) cat technically means concatenate, but you can also use it to just read the contents of a file.

Your terminal should display the contents of that file.

9. Create a new file on your Desktop

Using the same technique that you used in Step 7, create a new file on your Desktop called goodbye.txt. Open up that document and type something in it.

10. Join those two files together, why not?

This time we’re using cat for its intended purpose, concatenating (or smooshing together) files. In *.txt, the asterisk (*) acts as a wildcard, meaning any characters are allowable, as long as they’re followed by .txt. So this expression will concatenate all text files on your desktop and output them (>) to a new file called hellogoodbye.txt.

Working in the terminal is fun once you get the hang of it, and it’s really useful for things like combining files, moving things around, and converting file formats. Some weirdos even tweet from their terminals, but that’s pretty extreme.

Here’s a Unix cheat sheet. Using the cheat sheet, see if you can figure out how to:

If you’re intrigued by all of this, maybe you want to know more. UCLA’s library of Lynda videos includes a video called Unix for Mac OS X Users, which will teach you everything you ever wanted to know (and more!) If you prefer learning from a book, our library subscribes to a free-to-you ebook called Learning Unix for Mac OS X.

When you’re done playing with your terminal, move on to the Python tutorial.

This work is licensed under a Creative Commons Attribution-NonCommercial 4.0 International License.