Want to read a great big chunk of formal prose? Of course you do! This is an excerpt from the introduction to my dissertation, which is called Depth Perception. Here, I attempt to explain why anyone would write (or care) about medical films.

When we picture the human body, what do we see? The answer is less obvious than it might seem, and it depends a great deal on whom one asks. We might care about this question because the answer suggests that seeing the body is not a simple matter of opening our eyes. Making the body coherent — arranging its parts in logical, comprehensible sequences of cause and effect — requires complex sets of cognitive operations. The complexity of these procedures should give us pause: if visualizing something as “universal” as the human body is so complicated, perhaps the body is not so universal or so self-evident as we’ve thought. Nor is the body so immediately comprehensible; indeed, bending the body into coherence takes deliberate, continuous effort. The body, I argue, has a tendency to fall into disarray. It is only by telling stories about our bodies that we can make the pieces cohere.

END_OF_DOCUMENT_TOKEN_TO_BE_REPLACED

Long, long ago, I posted the the filmography from the “canon” exam that Yale’s Film Studies Ph.D. program administers to all of its graduating students. I promised to post the readings, too, and then promptly forgot. Anyway, here they are, in case you’re interested in some light reading. Apologies for the formatting errors; I didn’t have the wherewithal to clean this list up.

END_OF_DOCUMENT_TOKEN_TO_BE_REPLACED

I think about PowerPoint a lot, and judging by the reams of blog posts, screeds, and instructional books on the topic, I’m not the only one.

The interesting thing about PowerPoint is that it’s not that new. Well, PowerPoint is, relatively speaking (the software package emerged in 1980), but the basic idea — the slide presentation as a way to convey specialized knowledge — has been around a really long time.

END_OF_DOCUMENT_TOKEN_TO_BE_REPLACED

Jacob Sarnoff (1886–1961) was a pioneering physician-filmmaker. He was an early and enthusiastic proponent of using film to educate new physicians and demonstrate surgical procedures. He made hundreds of films, some of which survive in the archives of the National Library of Medicine in Bethesda, Maryland.

I’m interested in Jacob Sarnoff because I think his films show us something interesting about the endeavor of putting human anatomy on film. Sarnoff makes use of a wide range of techniques — everything from animation to dissection — to make the body legible on film. They show us how hard it is to capture human anatomy on film, and how much manipulation is required to make the human body conform to surgical diagrams.

Sarnoff and his films are the subject of the second chapter of my dissertation. In this presentation, which I gave at the Society for Cinema Studies in New Orleans in March 2011, I explain who Sarnoff was and what his films can tell us about surgical sight.

I’ve written a bit more about Sarnoff on my website, and you can also check out my sources.

I was recently doing research at the National Archives and Records Administration in College Park, Maryland. I was looking at documents related to the military’s venereal-disease prevention efforts during World War I. Here’s the funniest document I found:

The more I work on this subject of venereal disease prevention the more I am impressed with what seems to me to be the fact that a considerable number of women indulge in sexual intercourse for the same reasons that men do, for the pleasure and excitement that they get from it. Happily, the number of them is very much less than the number of men who do so.

END_OF_DOCUMENT_TOKEN_TO_BE_REPLACED

A lot of my research is on medical filmmaking: films that physicians and other medical professionals made for each other. It turns out that there are a lot of these. Doctors have been making movies since the invention of the medium.

I’m fascinated by a strain of thought that recurs frequently in discussions of anatomical films. Here’s an example from 1919:

END_OF_DOCUMENT_TOKEN_TO_BE_REPLACED

I’m excited that we have a publication date for an essay collection I’m contributing to. Learning with the Lights Off: Educational Film in the United States will be published by Oxford in winter 2011. The editors are Marsha Orgeron, Devin Orgeron, and Dan Streible. From the flyer:

Learning with the Lights Off is the first collection of essays to address the phenomenon of film’s educational uses in twentieth-century America. Nontheatrical film in general and educational films in particular represent an exciting new area of inquiry in media and cultural studies. This collection illuminates a vastly influential form of filmmaking seen by millions of people around the world. The essays reveal significant insights into film’s powerful role in twentieth century American culture as a medium of instruction and guidance.

My essay is on Thomas Edison’s Red Cross Seal films, which I’ve posted about here. I really liked working with Marsha, Devin, and Dan. Their edits made my work much, much stronger. The full list of contributors:

END_OF_DOCUMENT_TOKEN_TO_BE_REPLACED 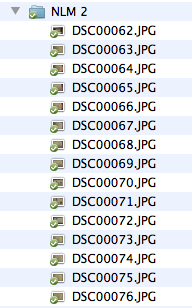