In theory, internet-based collaboration can improve the quality of scholars’ work. Though I didn’t have any reason to doubt this, I hadn’t actually experienced this for myself until recently.

About a year ago I uploaded one of the films I’ve been investigating, Thomas Edison’s 1914 The Temple of Moloch, to the Internet Archive. The Internet Archive is cool because you can not only view videos there; you can also download them.

Someone took the bait! YouTube user markdcatlin, an industrial hygienist in Akron, Ohio, re-uploaded The Temple of Moloch to YouTube as part of his workplace and environmental health and safety film collection. Mark included a great narrative along with the video, explaining that it depicts silicosis, or “potter’s rot,” a disease that had often been misdiagnosed as tuberculosis.

I hadn’t realized this, and in fact I’d wondered why, if TB is transmitted by a bacillus, you’d get it from working in a pottery, as the film seems to claim. I’ve actually presented my research on these films at conferences, but never — obviously — at a conference of industrial hygienists.

So there you go! The internet works! Good job, internet!

(Although I should also mention that, true to YouTube form, Mark’s upload of The Temple of Moloch is followed by a commenter’s xenophobic rant about immigration. The perils of free speech.) 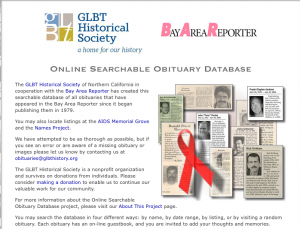 I think this is really powerful: the GLBT History Society and the Bay Area Reporter‘s searchable database of all obituaries that have appeared in the Bay Area Reporter (a newspaper that serves the GLBT communtiy) since 1979. I realized this summer that my students, around 19 or 20 years old, talk about AIDS as though it’s something abstract. Can you imagine? I’m very glad they have that luxury, but it also reminds me of how easy it is to forget.

I’ve been thinking about PowerPoint lately, and about how I might use it productively.

It seems pretty clear that the blizzard-of-bullet-points method is not useful. Who can make sense of such tiny print so quickly? What’s the point of slapping bullet points on a screen?

One popular alternative method is the one Cliff Atkinson advocates in the book Beyond Bullet Points. Atkinson has two basic suggestions. First, he argues that a single, dominating image, plus a trigger word or two is the best approach for any single slide. Second, he advocates crafting a presentation as a narrative, with a clear, logical, problem-resolution structure.

Here’s the thing that bothers me about that, though. END_OF_DOCUMENT_TOKEN_TO_BE_REPLACED

I spent the last couple of days in Cleveland, where I was taking part in the American Association for the History of Medicine annual conference. I gave a talk on a project I’ve been working on, about the largely forgotten twentieth-century tradition of physicians exhibiting for each other at medical conventions. I got some great references to archives during the Q & A, and I was able to meet some people working on similar stuff, so it was exactly the outcome I hope for at these conferences.

Just for fun (fun?), I’ve put my slides up on SlideShare, along with an audio recording of my presentation. I’d wanted to use FlowGram, since it’s supposed to do exactly what I wanted to do (record audio and match it with slides), but I kept getting errors when I uploaded my slides. SlideShare just worked.

I actually design my slides in Apple Keynote, not in PowerPoint, so I was happy to see that SlideShare supports Keynote slides directly, no converting required. Audio was a little trickier, since SlideShare doesn’t host audio files for you. I recorded the presentation using Audacity, converted it to an MP3, uploaded the file to my own server, and then linked it to the SlideShare presentation. SlideShare has a really cool, intuitive tool for synching up audio with slides.

Anyway, here’s the presentation. The topic is obscure enough that I can’t really imagine that anyone who wasn’t at AAHM will want to see it, but it was fun to put it up on the Web. I think I’ll do this again with some more accessible, general-audience presentaions.

Lately I’ve been volunteering to do usability testing for Yale’s library. Well, “volunteering” is probably too generous a word, since Yale pays pretty well, in the form of iTunes and Barnes & Noble gift cards. I like the gift cards, but I love the excuse to rant about what I do and don’t like about the library interface.

I have no idea how much of my ranting is actually relevant to the subject of the tests, but I enjoy it anyway. Most recently, I enjoyed ranting about what I’ve been calling “curated” databases, since I don’t know the technical term for them.

END_OF_DOCUMENT_TOKEN_TO_BE_REPLACED

I’m a little creeped out by the messianic quality of a lot of talk about technology and society. Take the TED talks. Don’t they have a weird, hucksterish vibe? I love me some social networking and whatnot, but spare me the long-tail-tipping-point-world-is-flat-crowdsourcing-flashmobs rhapsodizing.